This is a continuation from: 7 easy directions from the Sé Tram 28 stop to Castelo Sao Jorge

Castelo Sao Jorge in Lisbon Portugal was the first of the many castles I had visited in Europe.

The 2-3 hours spent wandering around the grounds of Castelo Sao Jorge, a Moorish castle which dates back to the medieval period of Portuguese history was very worth it. For the uninitiated, the Moors are medieval Muslim inhabitants of Maghreb, Iberian Peninsula, Sicily and Malta (present day Northwest Africa, Spain, Italy and a couple more tiny countries – click on the links to find out more).

The castle is a big draw with kids, judging from their cries of joy, giggles and laughter that rang out from the ancient walls when I was there. It was my first time in a European castle, and it was fun trying to imagine what happened centuries ago.

The castle’s opening hours and ticket pricing have been included at the bottom of this post.

Why is the castle named after Sao Jorge (St George)?

According to Wiki, the castle and the city resisted the forces of Castile (another neighbouring medieval kingdom) several times during the 14th century. It was during this period that the castle was dedicated to Saint George by King John I, who had married the English princess, Philippa of Lancaster. Saint George, the warrior-saint, was normally represented slaying a dragon, and very was popular in both countries.

Upon purchasing your tickets, you have the option of taking a map of the castle with you, which will come in very useful. The brochure not only acts a map, but also contains short descriptions of the sights to see at every station.

Castelo Sao Jorge was built in the mid-11th century. It’s situated in an area which is most difficult to access (which explains the rolling slopes we had to climb up just to get there). The purpose of the castle was to house military troops and in case of a siege, the elite who lived in the citadel. Unlike most European castles, it was not used as a place of residence.

It continues to retain 11 towers – the most popular being the Torre de Menagem (Tower of Keep). The Tower of Keep was the most robust of all the 11 towers, built to withstand heavy attack and was used as the main command post.

2. Romantic Garden – Ruins of the former royal palace of the Alcacova (Citadel)

The buildings now house the Permenent Exhibition and the Cafe and Casa do Leao restaurant. Areas of the Romantic Garden and patios also display some architectural features that were part of the royal residence.

There are several restaurants you could visit to have a meal, or just a beer. It makes for a nice place to chillout. 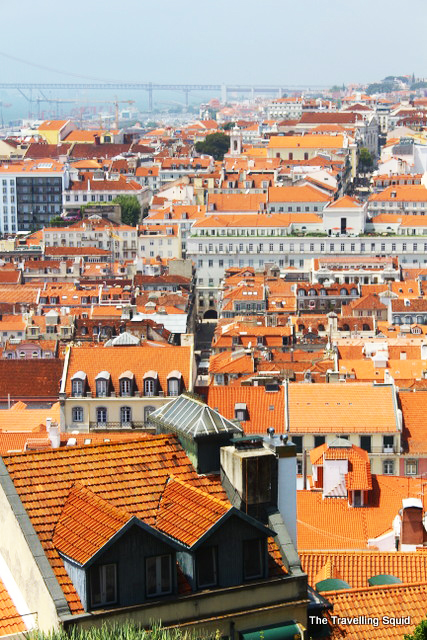 Did I mention that the view is great? From here, you can see the signature brown rooftops of the houses of Lisbon, and the faint outline of the 25 de Abril bridge in the horizon.

A museum in the castle, the Permanent Exhibition houses a collection of objects found in the Archaeological Site and introduces various cultures and lifestyles from the 7th century B.C to the 18th century which contributed to building modern-day Lisbon. There is particular emphasis on the Moorish period from the 11th – 12th centuries.

The Camera Obscura is made up of an optical system of lenses and mirrors. It provides 360 deg views of the city in real-time, including the monuments, river and the hustle and bustle of Lisbon. We missed the English tour when we were there, and the next one was not for an hour. I suggest to head to Camera Obscura immediately upon entry into the castle to check out the tour timings when you arrive.

1) The first known settlements dating back to the 7th century B.C

2) Remnants of the Moorish era residential area, from the time of the castle’s construction in the mid-11th century

3) Ruins of the last palatine residence in the former citadel, destroyed by the earthquake of 1755

Unless you’re into geography or history, I personally felt that the archaeological site looked somewhat like a construction site. If you have tired legs, my advice is to give it a miss as it’s a long walk up and down the forts.

Unlike other European castles, Castelo Sao Jorge does not have exhibitions on the living quarters of the monarchy, which is fine because the old castle walls and forts really pack a punch. Being on the highest, most inaccessible hill-top, the viewpoint of Lisbon is excellent, and the Romantic Gardens gives one the opportunity to chill and enjoy the place.

We missed out on visiting the Camera Obscura because we left it to the very last and had missed the tour in English. The next tour was an hour later. Therefore as mentioned earlier, make this your first stop upon entry to the castle. That way you get to spend time visiting the castle grounds and head back when the tour starts.

Castelo Sao Jorge is definitely a must-see. There’s a lot of walking to do, therefore do remember to wear a comfortable pair of shoes when you go.