The Gallery of Modern Art at Pitti Palace was to me, the best gallery of Uffizi Gallery in Florence. To be honest, I was a little tired from looking at famous paintings from centuries ago at Florence Cathedral, the Dodge’s Palace in Venice and the Milan Cathedral. As they were religious works of art, the themes were similar. After seeing many different impressions of Madonna, we longed for something more modern – an impressionist piece or two, or simply, pieces of natural scenery or artworks unique to Florence. Unlike the famed Leonardo da Vinci paintings, here are 7 lesser known paintings at Pitti Palace’s Gallery of Modern Art.

The Gallery of Modern Art in Pitti Palace houses works from the late 18th century to the early 20th century, which impacted Italy’s art scene. Some of the pieces are best works from competitions, while artworks from private and public collections were added to it later on. Once inhabited by the Grand Dukes of Habsburg-Lorraine, these rooms now host Neoclassical and Romantic artworks.

1. The morning of 27 April 1859 by Enrico Alessandro Fanfani

According to the Uffizi Gallery, the painting captures a crucial moment in Florentine history: the peaceful expulsion of the Habsburg-Lorraine family from Florence, and the creation of a provisional, independent government that marked the prelude to its voluntary annexing to the Kingdom of Italy. According to a Florentine lawyer who was just eight years of age, it was a “velvet revolution” since the change of government was completed without the use of violence.

The painting shows a moment of jubilation inside the Loggia de’ Lanzi: some are celebrating the departure of the grand duke, Leopold II of Lorraine leaving Florence with his family, in a carriage directed towards Vienna. Some others are raising the Italian flag with others are throwing their hats in the air, and some are simply observing the event.

It was an interesting picture especially since we had visited Loggia de’ Lanzi earlier on and I was taken back by the statue holding a beheaded head with sculpture blood trickling down – it was not the most pleasant of sights. I was glad to know the significance of this picture.

2. Afternoon in Fiesole (Self portrait) by Baccio Maria Bacci

I found this painting striking because of the simplicity and realism of it all. It make me think of a weekend scene at a friend’s house. People having a conversation after a fulfilling meal. Indeed, according to the Uffizi Gallery, this was a scene of the artist’s home at Fiesole, near Florence. Bacci is seated on the right with his dog in front of him, while his friend, artist Guido Peyron is playing the guitar. The two ladies are the artist’s wives.

This was interesting because it encompasses different genres, the portrait, the still life on the table top, the genre scene and the painting of the landscape of Tuscan hills seen from the room, come together within the space of the painting. 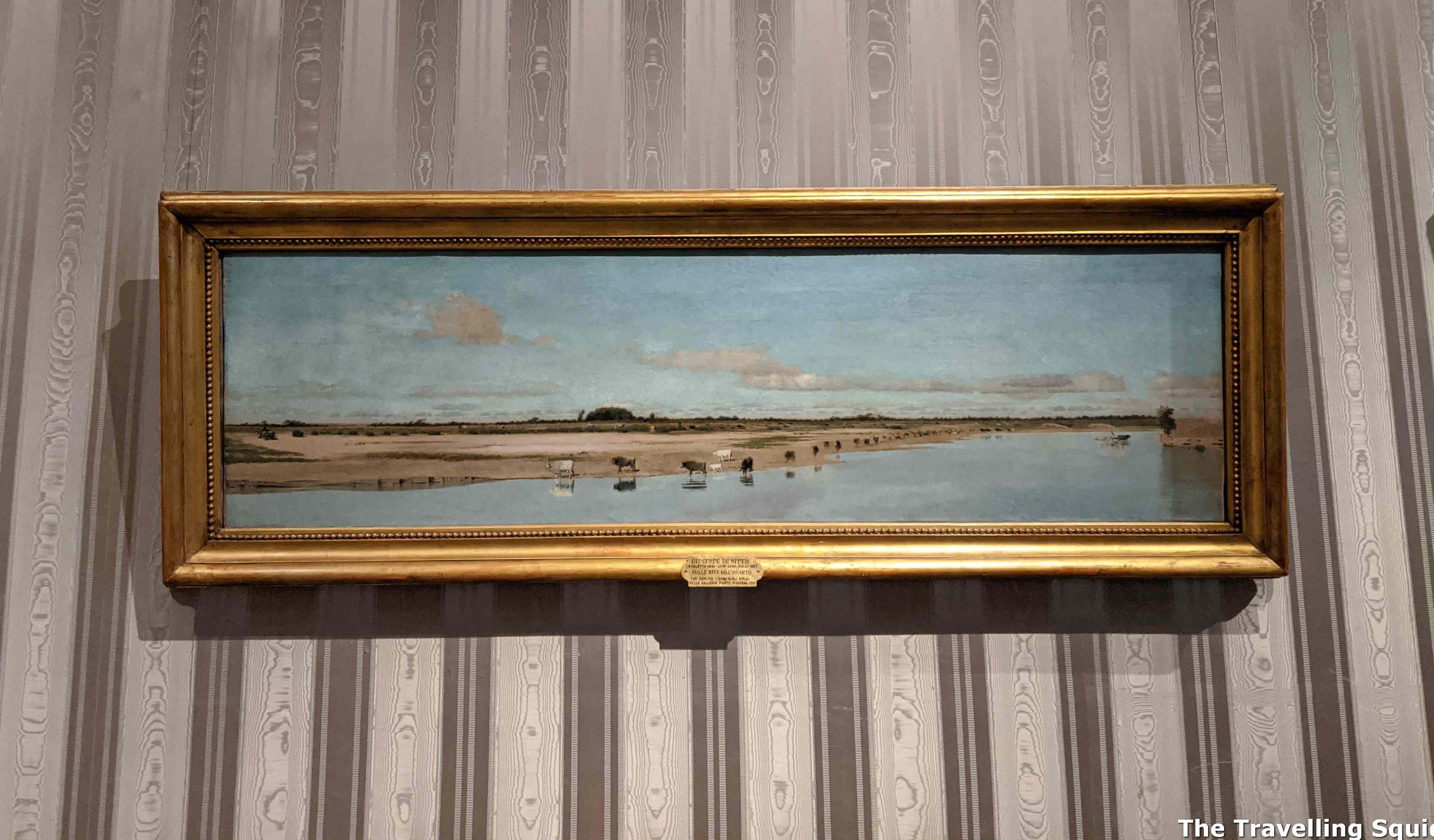 This painting describes a scene along the banks of Oftanto located in Southern Italy. It is calming, with the lake providing an almost perfect reflection of the sky. I thought that with its calming effect, it would be a nice painting to put at home. It seems that many people thought the same and there were many shops online selling the canvas version of this painting. The painter, Giuseppe De Nittis, was one of the most important Italian painters of the 19th century, merging styles of Salon art with Impressionism. Unfortunately, he died at a young age of 38 from a sudden stroke.

The portrait of his father, Karl Eduard von Liphard, was painted by Ernst Friedich von Liphart in 1883. This was some years after Ernst had been disinherited by his father in 1873 for converting to marry a Roman Catholic Florentine girl. I like the depth of this picture and the number of pictures within a picture. Perhaps Ernst did this to convey affection for his distant father. Ernst later went on to be an accomplished artist, painting portraits including one of Tsar Nicholas II, and then later became curator of the Hermitage Museum in St Petersberg.

This was one of the rare impressionist paintings I had come across in Italy, and I absolutely loved it. I enjoyed the movement of the trees and leaves against the backdrop of the setting sun. There was some movement and elegance amidst what seem to be overgrown plants on the first glance. I would say Giorgio Kienerk was not as well-known as the other painters featured in this post, but the the rare impressionist painting in the Gallery of Modern Art was like a fresh breath of air.

I was very surprised to see a picture like that – it looked almost like a photograph but it was actually done in oil. The Florentine sums up the description of the picture quite well:

It is of two youths relaxing, in a style typical of paintings by Corcos, who was known to have a keen interest in the industrious spirit of women. Stella looks at the observer straight on, her timid wistfulness unlike the guile found in many of Corcos’ other portraits of high-society women, while Piero teases her with loose pieces of straw.

The painting was made in 1889 and was acquired by the Uffizzi Gallery in 2018.

7. The Arno River And The Holy Trinity Bridge In Florence by Antonio Fontanesi

Visitors to Florence would find the Ponte Santa Trinita (Holy Trinity Bridge) familiar. I liked the way the houses and bridge were depicted in the picture, with the setting sun fading in the background, highlighting the arches of the bridge. The painter Antonio Fontanesi was an 19th century Italian painter who lived in Meiji period Japan between 1876 and 1878. He was responsible for introducing European oil painting techniques to Japan, and was responsible for influencing Japanese architecture and art for the next few decades.

I’m sure that there are many more lesser-known paintings at Pitti Palace’s Gallery of Modern Art worth checking out, but hope you enjoyed this rough guide. While I did enjoy this part of the museum very much, there seems to be a lack of English descriptions for each painting. You were find more detailed English descriptions for paintings at the Uffizi Gallery nearby. Enjoy!

Not sure what these flowers are but they're pretty

Made Cantonese-style steamed fish (蒸鱼) for the

If you're looking for good Singaporean food in NYC

Only managed a glimpse of the Statue of Liberty's

For the real deal see next pic pls 🙃

A guide to visit Florence Cathedral in under two hours

If you're in Florence for a few days, visiting Florence Cathedral is almost a necessity given the size and significance...