The Royal Palace of Madrid does appear to be a must-visit for any first time visitor to Madrid, essentially because it is ‘a palace’. That being said, to be honest, if you’re not really into Spanish history and culture, doing away with the visit is absolutely fine. Personally, I’d rather spend more time at the Prado Museum, looking at paintings. This is because while the facade of the palace looks really nice, there wasn’t any clear differentiating aspects that made it stand out from other palaces in Europe.

History of the Royal Palace of Madrid

The Royal Palace of Madrid is the official residence of the Spanish Royal Family at the city of Madrid, but is only used for state ceremonies. King Felipe VI and the Royal Family do not reside in the palace, choosing to stay in the more modest Palacio de la Zarzuela on the outskirts of Madrid.

Several rooms in the palace are regularly open to the public except during state functions. An admission fee of €12 is required except for residents of the Iberian Peninsula.

The old Alcázar (“Castle”) was built on the location in the 16th century. It burned 24 December 1734 and King Philip V ordered a new palace built on the same site. Construction spanned the years 1738 to 1755 and followed a Berniniesque design by Filippo Juvarra and Giovanni Battista Sacchetti in cooperation with Ventura Rodríguez, Francesco Sabatini, and Martín Sarmiento. Charles III first occupied the new palace in 1764.

The last monarch who lived continuously in the palace was Alfonso XIII, although Manuel Azaña, president of the Second Republic, also inhabited it, making him the last head of state to do so. During that period the palace was known as “Palacio Nacional”. There is still a room next to the Real Capilla, which is known by the name “Office of Azaña”.

What’s in the Palace? 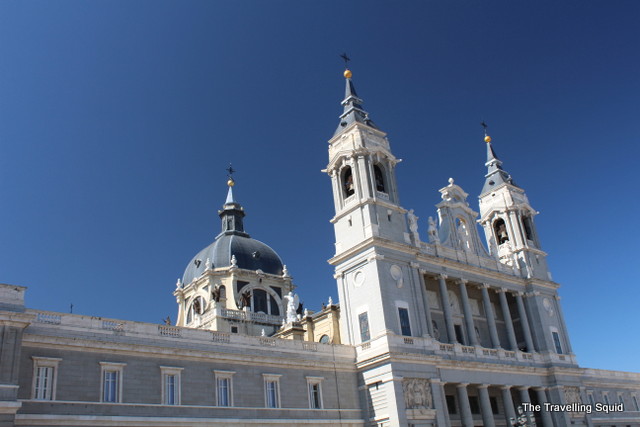 The palace has 135,000 square metres of floorspace and contains 3,418 rooms. It is the largest palace in Europe by floor area. The interior of the palace is notable for its wealth of art and the use of many types of fine materials in the construction and the decoration of its rooms. These include paintings by artists such as Caravaggio, Velázquez and Francisco de Goya and frescoes by Corrado Giaquinto, Juan de Flandes, Giovanni Battista Tiepolo and Anton Raphael Mengs. Other collections of great historical and artistic importance preserved in the building include the Royal Armoury of Madrid, Porcelain, Watches, Furniture, Silverware and the world’s only complete Stradivarius string quintet.

The square as it exists now was laid-out in 1892, according to a plan by the architect Enrique María Repullés. However, the history of this square dates back to 1553, the year in which Philip II ordered a building to house the royal stables.

I have included mostly pictures in this write-up because to me, the palace is simply just a palace. It did not have a huge impact on me, like the Prado Museum did, or La Sagrada Familia in Barcelona. My take is that the admission fee of €10 could be spent somewhere else, such as shopping, having nice plates of tapas or enjoying a bottle of wine.

Have you been to the Royal Palace of Madrid? Do drop a comment!

One Response to "Is the Royal Palace of Madrid worth a visit?"