My review of the Seongeup Folk Village in Jeju is not great. Our guide Mr Ko drove us there, and subsequently handled us to a tour guide who brought us around. He was Korean, but spoke Mandarin. I didn’t find the things he said particularly illuminating. I suspect that very much of the Seongeup Folk Village is catered to mainland Chinese tourists.

Objectively, the guide was very informative. He spoke at length about Jeju’s past, and how in the olden times, the ladies had to dive into the water to fish, as a livelihood. They were known as “women of the sea” (海女) . The tour brought us to see the home of a retired 海女 and her husband. The house had maintained its traditional thatched facade, but the interior had the trappings of modern living – a sink, tap, electronic appliances etc. 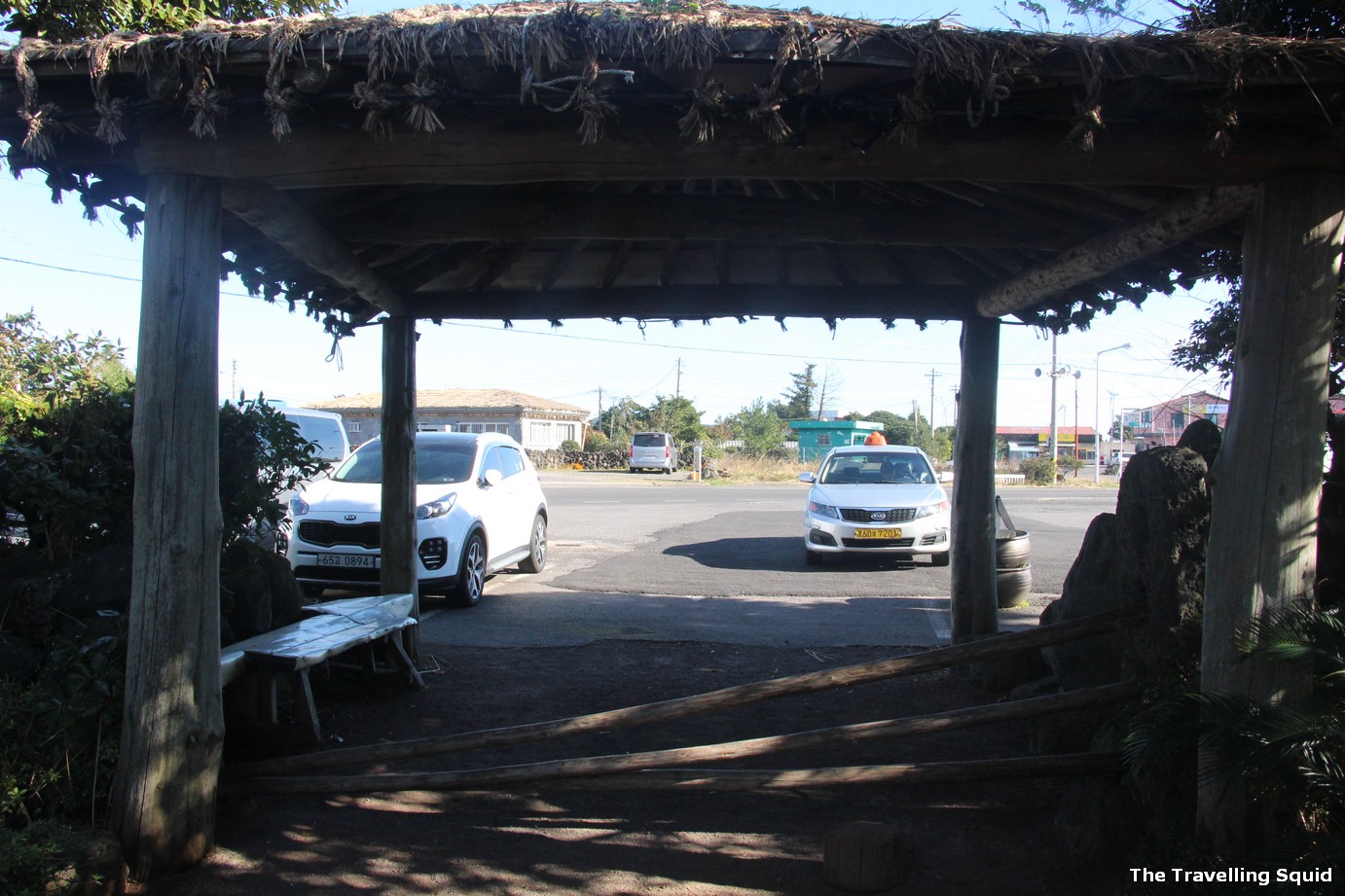 We were told that the number of sticks placed outside the door was indicative of when the owner was returning. For instance, if the owner was gone for a long while, there will be three sticks lined up. If he/ she was at home, the sticks will be down, like in this case.

The other houses were more for exhibition purposes:

The Wet Suit is given by  the Government to protect these girls. The water is typically freezing cold, and the wet suit helps to keep them warm.

If you have to use the toilet, it’s a comfortable process. The seat is lined with a cushion, for you to sit on you do not get to rest on the cold surface of a plastic seat, especially during winter. It was pretty comfortable.

Throughout the tour, I was wondering what was the hook. Surely, they don’t do free tours. We eventually approached a hut with some vats in it.

He started his story, based on the popular TV show, 大长今. Till then. Friend H and I thought she was fictional. He said that during her exile to Jeju, she concocted a medicinal drink with good bacterial, which aids in digestion and is good for health.

He said that there were five tastes to this drink, and if one day one was not able to taste the drink, it could imply that the person would die in 20 days.

We were later led to a presentation room of sorts – alas I was reminded of the emporium I was forced to visit during the tour in Huangshan. There were a variety of products on sale, such as horse cream, and some other random products (which not much use). He positioned it as if we were helping the local villages make a living. One was the Five Tastes Drink which could predict one’s death quite certainly. There was a bottle for it for us to try – well it’s a bit of stating the obvious cos the taste is very strong. It was sweet, sour and salty at the same time, tasted abit like a plum concentrate.

I tried it and did not want to try another mouthful. Friend H tried it, and for some reason, liked it. The concentrate was on sale – it cost a whooping 50,000 won (SGD62). I searched in my head for reasons to reject this sales/ tour guide. The next thing I knew, Friend H said she would take two bottles.

Now I was a little taken aback, and the Sales Guy/ Guide was very pleased. He proceeded on a lengthy description of how the drink would be good for one’s health, which I was doubtful, because it tasted like the Allswell Plum Juice.

He later on tried to persuade us to take a tour with him the next time we return to Jeju, citing how it was easier as he was proficient with Mandarin. He also cited a rate lower than what we were paying Mr Ko for. For some reason, I just didn’t like him.

I didn’t find the tour of the Seongeup Folk Village in Jeju very illuminating. Granted there were some interesting tidbits of information, but the whole sales process towards the end wasn’t my kind of thing. I would have probably tipped him 10,000 won if I was not buying anything.

If you would like to visit a folk village without a running commentary or a sales pitch, check out the Micheon Cave in IIchul Land Jeju. There was no one at the folk village when we were there, and the houses look similar, if not, better maintained.

Have you been to either of the folk villages? Share your experiences in the comments below.