I have been to Bali, Java and now to Sumatra, and that’s a really apt quote to describe Indonesia. Bali is the place for a vibrant beach party, while Java is home to the awe-inspiring Borobudu, the hallmark of one the greatest civilizations in South East Asia.

Sumatra is relatively less travelled than the other two, but it’s incredibly special.

The first thing that strikes you when you arrive, is the soil. Everywhere you go, even in the busy city of Medan, the soil sparkles under the rays of the afternoon sun, making each stride you make a special walk through time.

It was Lake Toba, also known as Danau Toba that drew me to Sumatra. It’s not a popular destination in South East Asia and the only reason why I wanted to come was because I heard stories about it since I was young. It was the honeymoon destination of The Parents.

28 years ago, The Parents embarked on a tour to the famous lake. They took a coach from the airport in Medan there. Back then, lush vegetation – ferns, trees and wild bushes sprawled across the sides of the highway. Today, the jungle sprawl has been replaced by acres and acres of rubber trees and oil palm neatly lined up in endless rows.

The Father said that he remembered seeing coniferous trees when he was there, but I don’t see any of them now, probably due to the effects of global warming. He also remembers taking home a piece of pine wood as a souvenir – and perhaps that is when his love for pine wood developed. Our sofa is in pine, and it has been around for a long time.

I can effectively drop Lake Toba under the list of places to visit in SEA. Some friends have told me  that the photos are really nice, but I felt that it wasn’t just about the sight, sounds and smells, but the journey of discovery it could offer you.

Beyond the beautiful photos, what needs to be highlighted is the photos only represent the somewhat positive side of the place, and that the perceived serenity of the place is limited. Especially in transit town of Parapat. While a fisherman lazily lights up a cigarette while waiting for the fish to “makan” the bait and watches the world go by, there are piles of rubbish lying by the sidewalk. Sometimes, a breeze closes in and you could smell a whiff of raw fish, mixed with the thick odours of the marinating salt solution that can be repelling to some.

The best would be to stay on the Tuk Tuk island in Samosir. That involves taking a ferry from Parapat to Samosir (see the “How To Get There” section at the bottom of this post.) It’s generally more calm, peaceful and clean on the island that is about the size of Singapore, supposedly formed by a massive volcano eruption 77,000 years ago.

On the Samosir island, it’s not difficult to envision how the island could be a product of a volcanic eruption. It’s mostly hilly with cracks forming along the undulating slopes. These seem to be the marks of red hot lava which have trickled down, leaving lava lines that exist until today.

Because Lake Toba is in close proximity to some pretty active volcanos, the soil is rich and special. It’s dark grey, unlike the clayish red soil that you get here in Singapore. As I mentioned earlier, the soil on the ground seem to sparkle under the rays of the sun, making the 5km walk we took from Tomok to Tuk Tuk ever more special.

If you could ride a bike, I suggest you take a ride around Samosir. If your abilities are limited to that of your pair of legs, put on those trekking shoes and follow the winding road from Tomok to Tuk Tuk, but not before arming yourself with an umbrella. The weather is erratic in Sumatra – passing showers are common and the rule of thumb is that if you don’t hear the clap of thunder, the rain is only going to last for five minutes. The sky can turn threatening grey in a matter of minutes and the rain could last for a long long time and sometimes flooding does occur.

Furthermore, if you are open to the idea, the umbrella also acts as a repellent against the scorching sun;)

As I mentioned earlier, the journey there is not easy. To get there, I took a becak (something like a Tuk Tuk) and then a public bus, and smoking is allowed on board. There was a passing shower and they closed all the windows. But when the rain stopped, the windows did not open but the passengers continued smoking. It felt like a chimney.

If you’re fair, you may get hustled by touts and some may even take advantage of the lone female traveller.

Ask any experienced traveller, and he or she would tell you that the best places in the world are always hard to come by. There’s always some obstacle in the way, but once we make the effort to get over that, there’s a treasure trove of beauty waiting for us.

A sad side to the Lake Toba story is that the region has been frequently affected by volcanic eruptions and numerous earthquakes of magnitudes hitting more than 7 on the Ritcher scale. Perhaps, that’s the price to pay, for having a giant beauty at your doorstep.

Lake Toba is an escape for the tired-out soul, sometimes lost between the struggles of a Singaporean life. The slowness and simplicity of the people and the gentle ripples of the lake has an indescribable healing power for the stressed, sad or confused.

All you need is to surrender your heart and mind and forget the world. For that short time when you’re here.

The perfect weekend getaway if you don’t mind making a 5 hour road trip to get there. Instead of bunking in at the seemingly more convenient Parapat, head down to the Tuk Tuk island in Samosir, a 45 minute ferry ride from Parapat. You can find many more lovely cottages with fantastic views. 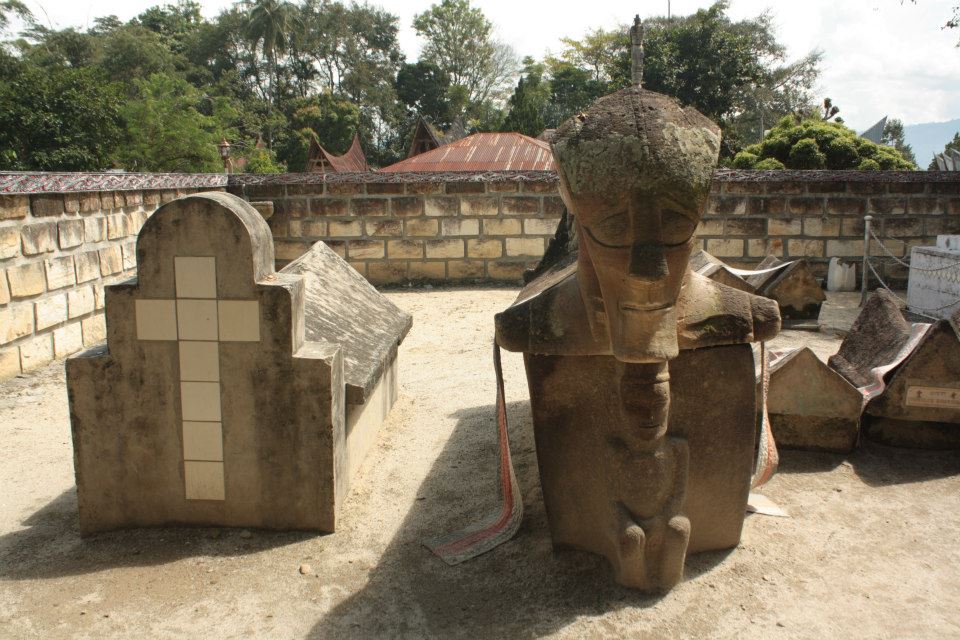 It is the norm for the accommodation places there not to provide any aircon or fan. To bypass that, have a chilly bath in cold water before sleeping or bring along a sweet travelling companion who wouldn’t mind manually fanning you throughout the night.

Obviously, I had to make do with the former.

Fun fact: Samosir, the island in the middle of Lake Toba is almost the size of Singapore!

How to get there:

Take a becak (something like a tuk tuk) from outside the Polonia International airport near the petrol station to Terminal Bas Amplas. It will cost you about Rp 30,000. Then take a local bus to Parapat. It will cost Rp 25,000 and take 5 hours. The bus should be quite easy to locate with the help of your friendly becak driver. You may even arrange with a tour agency in Medan for direct transport to Lake Toba. It would be more costly.

Smoking is allowed on the buses.

From Parapat, you can take a ferry Rp7000 to Samosir at a number of ferry terminals. Before boarding the ferry, specify which part of Samosir you will be heading too eg. Tuk Tuk/ Tomok etc.

How to get back:

You can take the ferry back to Parapat. From there, book a taxi back to Medan, it should bring you directly to the airport directly. A much more comfortable, smoke free journey. Takes about 5 hours (slightly longer on weekends) and costs Rp 65,000.

One Response to "Lake Toba – The Seduction of Sumatra"